Community governance was the second nerd thought that came to mind as I was soaking and scraping the parking violation sticker off my vehicle. Rules and guidelines exist within any reasonable community. The fun is in how strict they are and how they are enforced. My community’s homeowners association enforces rules centrally–it is the one that calls the shots and levies punishments. The community doesn’t have much say in individual cases. Online communities, however, do handle individual cases as a community, which results in better monitoring, better decision making, and better enforcement.

Many sites have terms of use. Sites assume that typical uses are valid but provide a way for users to report misuses. Facebook, for example, has a “Report This Photo” link whenever you view an album image. If an image is reported, it is inspected by a Facebook team member who makes a final decision on whether the photo stays or goes (source: http://www.facebook.com/help.php?tab=safety#ansj7). 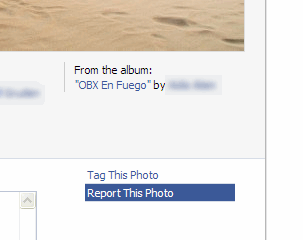 This technique was first popularized by the dating site HOTorNOT around 2000. One of the site’s founders, James Hong, originally hired his parents to screen flagged photos so he could continue coding. James quickly realized that the enforcement model had two problems with it. First, it didn’t scale well as the number of photos on the site increased exponentially–he needed to hire more people. Second, his parents were looking at inappropriate pictures eight hours a day.

Over the past seven years, the site has slowly matured from a centralized moderation system to a decentralized one consisting of volunteers. There is a nice explanation on Wikipedia of the site’s implementation of the principles found in The Wisdom of Crowds–a book that discusses how decentralized decision making results in better decisions. Although effective, the system requires volunteers who are willing to subject themselves to potentially vile images. In addition, as addressed in The Wisdom of Crowds, judgments rendered by appointed individuals do not reflect the values of the community accurately. We need a solution that relies on the community to make judgments. Digg is a popular news and media aggregation site that thrives on democracy. Readers vote for or against published content. Higher-ranked content gets more exposure, while other content gets buried. One of its weaknesses though is its susceptibility to mob-effect.

A community-based solution to the “Report This Photo” feature would be a voting mechanism that would kick-in if an image had been flagged as a violation of the terms of use. When community members would stumble upon a flagged image, they would be given the option to vote for or against it. Once a certain threshold had been met (albeit relatively low), the image could be flagged as appropriate or inappropriate permanently. Inappropriate images would be blurred beyond human recognition or removed completely. After time, those who voted in-line with the community’s final decisions could be given weighted votes to expedite future judgment calls. Such weighted voters would have more influence on future cases not because they are considered experts on morality but because they make judgments that best reflect the entire community.

In order to provide a truly decentralized judgment system and avoid mob-effect, the vote tally would need to remain hidden. Taking this idea further, “Report This Photo” could simply be a facade to the voting system so that flagging and voting is truly blind. Views of the photo without the link being clicked would be a vote for the photo to remain on the site and views with a “Report This Photo” click would be a vote to remove the photo from the site. Obviously, views would be tracked once per user. (Maybe Facebook is doing all of this already but just hasn’t updated its help documentation.)

This site uses Akismet to reduce spam. Learn how your comment data is processed.

I serve as the VP of Product, Engineering, and Design on Imagine Learning Classroom. In my spare time, I made an augmented reality game for Apple devices call Farhaven AR.

If you would like me to give a talk at your meetup, conference, or company, or interview me, please contact me via LinkedIn. I have spoken on podcasts, at meetups, conferences, incubators, and other events. Occasionally, I appear in industry news. I'd be honored and excited to help.

These are my personal views and do not necessarily reflect the opinions of my employer.